On December 19th, Selena Gomez called off the Australian end of her tour. After calling off her tour, rumors have surfaced that the 21-year-old singer has been partying too much and needed to seek rehab treatment.

On December 24th, a report claimed that Selena’s wild side started last year when she started partying with her “Spring Breakers” co-stars Vanessa Hudgens and Ashley Benson. Sources claimed that once the filmed finished, Selena’s wild partying continued. An insider told Star magazine that:

“Her friends and family are worried that there might be a serious problem.”

So the news that Selena canceling her tour and the fact that she’s “partying obsessively” had people questioning what was going on with the star.

But the rumors were exactly what they were meant to be…rumors. According to Hollywoodlife.com, sources close to Gomez say that “reports that she’s going to rehab and seeking professional help is totally not true.“

It’s good to know that Selena is not suffering from any type of substance abuse, she just needs some personal time to relax which should be respected. The star has been busy touring and promoting her album so it comes as no surprise that she needs a break. In an official statement. Selena said:

“My fans are so important to me and I would never want to disappoint them. But it has become clear to me and those close to me that after many years of putting my work first, I need to spend some time on myself in order to be the best person I can be.” – Selena Gomez

Enjoy your time off Selena!

This is a very interesting take, what do you think?

Amanda Bynes has been lying low since her wild incidents this past summer. So what has the former child star been upto?

Well, according to sources who are close to the Bynes family, Amanda has enrolled at the Orange County Campus for the Fashion Insitute of Design and Merchandising. Amanda has always been interested in fashion and decided she would like to start a career in the fashion world.

Bynes is currently in the custody of her parents Rick and Lynn as she continues outpatient treatment.

On Sunday December 22nd, a healthy looking Amanda was spotted traveling in and out of a few stores in Los Angeles, where she was finishing up some last minute Christmas shopping.

Amanda looks healthier than she has in quite some time. Her family attorney Tamar Arminak told E! News exclusively that Amanda is doing very well and is reestablishing a close and loving relationship with her family.

We wish you all the best Amanda! No matter what your politics may be, you have to feel for the guy after competing fiercely for so many years. Make sure you catch this movie on January 24th when it is released on Netflix.

Keep scrolling down for the latest updates as well as what eyewitnesses are saying about what happened!

On Wednesday morning between 12:30am and 1:00am, Testudo, an iconic symbol at the University of Maryland campus, was set on fire in front of McKeldin Library. There are no details on how this fire started or who may have been on the scene at the time of the fire. The pictures above were taken after the fire was put out.

Thank you to @BriannaBytes for the tip.

UPDATE: Rumors have surfaced on Twitter that the fire was started accidentally by candles which were lit around Testudo. Others have also speculated that there were smokers around Testudo when the fire started but there is no direct concrete connection between the smokers and the fire. 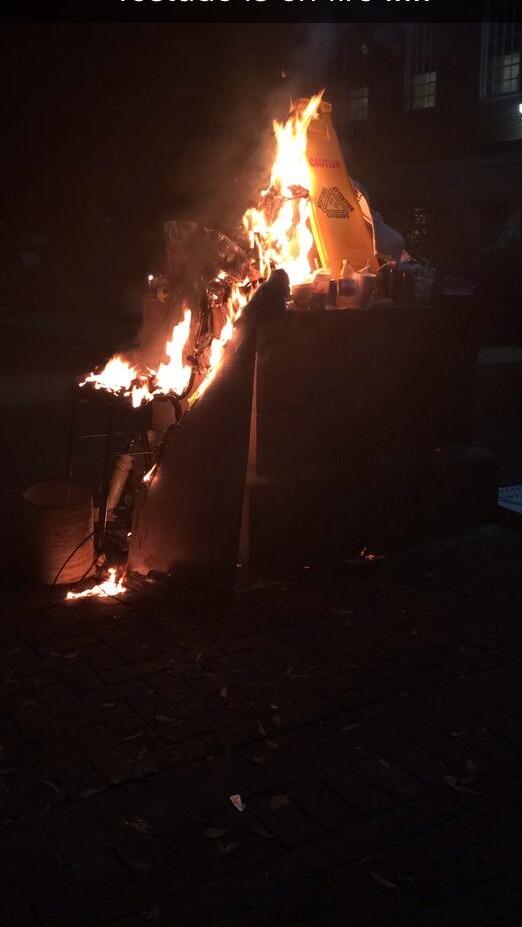 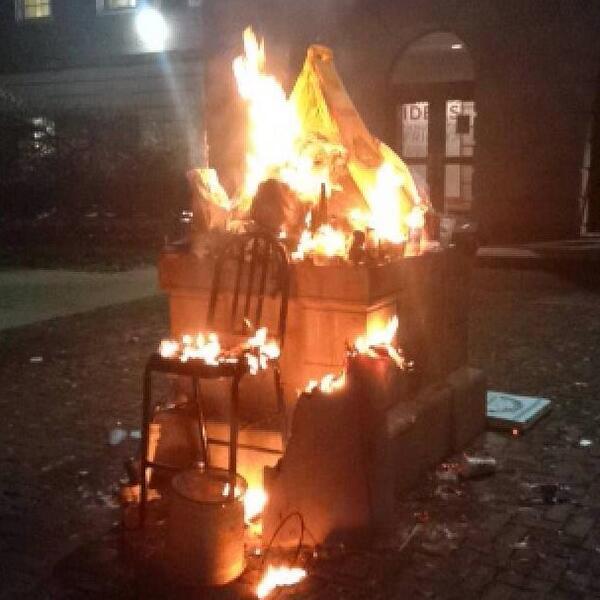 “The fire in front of Testudo tonight. The UMD tradition of finals offerings has officially gone too far” – @MarParNews

“So somebody set testudo on fire…. Now he’s covered in dust and being investigated by the police” – @notMaryKate

UPDATE: #Testudo is currently TRENDING in the United States on Twitter as of 1:59am.

ANOTHER UPDATE: We have a first hand account which was just tweeted to us.

I then asked what the reasoning might’ve been behind intentionally setting a fire near Testudo and here is his response.

YUP, ANOTHER UPDATE: A popular Facebook account among UMD students, Maryland Compliments, has requested UMD students to make the best out of this situation.

UPDATE 7:42am – Here’s a photo of trash being cleaned up at Testudo courtesy of @TheFrenchyze 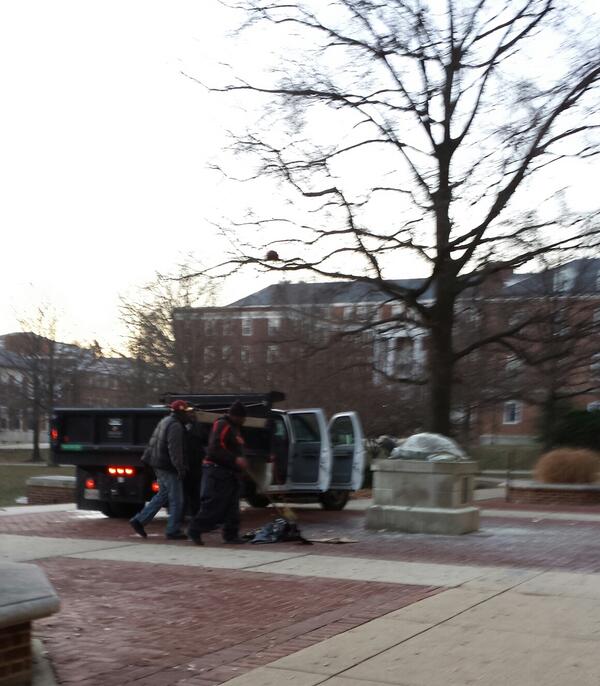 We also have another recollection of what happened from another eyewitness (@jake_tuthill) which matches what we were told earlier, as seen above:

About Testudo, the guys didn’t try to set him on fire, they had a lampshade burning on a chair and it caught on all the trash/cardboard pope

UPDATE 7:52am – The Diamondback’s sports editor, @danieljtgallen, has posted an updated picture on the cleanup happening at Testudo. The turtle is STILL standing strong. 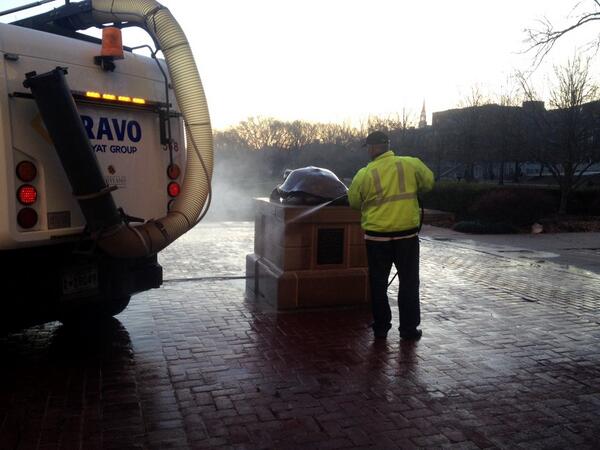 FINAL UPDATE 8:52am – The President has spoken.

Since 2009 “The Walking Dead” has become one of the biggest shows on television and the creator of the show is now after AMC for his end of the dough.

Frank Darabont was the guy who adapted the highly popular comic book series into a television series back in 2009. In his lawsuit he is claiming that he was supposed to receive 12.5% of the profits from the show, but claims that AMC fired him back in 2011 and didn’t give him a penny.

Since it’s airing in 2009 the show has become increasingly popular, so popular that it’s receiving more ratings than Sunday Night Football, yet AMC is telling Darabont that the show is a “Deficit”. Darabont has said that AMC has defrauded him by producing and distributing the show to itself and essentially screwing him out of his share of the money.

“The creator of “Mad Men” gets a huge cut of a $3 million fee PER EPISODE, even though Mad Men gets less than 1/4 of the viewership of “The Walking Dead.” says Darabont.

Darabont is suing AMC for millions of dollars and he also wants a cut of “The Talking Dead” which is the talk show that follows each episode.

AMC has not said anything, in regards to this matter.

A day after adding a “donate now” button to it’s page, which helps non-profits raise money, Facebook will now be introducing automatically played video ads. These ads will play on users’ feeds beginning on Thursday according to the Wall Street Journal.

Facebook has argued in the past that they’re beginning to replace television as the place where people spend their time being entertained. In order to capitalize on that advantage, it makes sense for Facebook to sell video ads because they could have a bigger reach/audience than a normal night on television.

Facebook has about 1 billion+ users. If half of those users saw the same video advertisement before signing in to their page, (and according to statistics, at least 50% of all users log on to the site on any given day) then you have the potential to reach more people globally than the Super Bowl.

The only problem with this scenario is that Facebook is starting to become more and more unpopular here in the United States. Could this alienate fans even more and lead Facebook into facing a “MySpace problem”?

For example, if I’m trying to go on Phillip DeFranco’s Facebook page to see his videos, maybe a 30 second ad pops up before I have access to the page or access to each video. In a potential situation, the money made off of those ads could be split between the talent/star and Facebook evenly which would be a better deal than what YouTube offers it’s stars and it helps Facebook continue to grow it’s pageviews.

This could become the first legitimate rival to YouTube in a perfect world.

Anyways, back to the topic at hand…..ads are expected to be 15 seconds long and will play on both mobile and desktop devices. It is estimated that ads could cost $2.5 million each.

There’s an urban myth which has gone around over the years, which has a similar plot to the following video:

On a British Airways flight from Johannesburg, a middle-aged, well-off white South African Lady has found herself sitting next to a black man. She called the cabin crew attendant over to complain about her seating.

“What seems to be the problem Madam?” asked the attendant.

“Can’t you see?” she said ” You’ve sat me next to a kaffir. I can’t possibly sit next to this disgusting human. Find me another seat!”

“Please calm down Madam.” the stewardess relied. “The flight is very full today, but I’ll tell you what I’ll do-I’ll go and check to see if we have any seats available in club or first class.” The woman cocks a snooty look at the outraged black man beside her (not to mention many of the surrounding passengers). A few minutes later the stewardess returns with the good news, which she delivers to the lady, who cannot help but look at the people around her with a smug and self satisfied grin: “Madam, unfortunately, as I suspected, economy is full. I’ve spoken to the cabin services director, and club is also full. However, we do have one seat in first class.” Before the lady has a chance to answer, the stewardess continues … “It is most extraordinary to make this kind of upgrade, however, and I have had to get special permission from the captain. But, given the circumstances, the captain felt that it was outrageous that someone be forced to sit next to such an obnoxious person.” With which, she turned to the black man sitting next to the woman, and said: “So if you’d like to get your things, sir, I have your seat ready for you…” At which point, apparently the surrounding passengers stood and gave a standing ovation while the black guy walks up to the front of the plane.

Now, is this story true? NO. But this is a great example and great story of how to combat racism. Hopefully we can end bigotry and racism as time goes by.

Shoutout to our writer Dallas Jordan for sharing this on his Facebook.

Khloe Kardashian is filing for divorce from Lamar Odom … TODAY … TMZ has learned.

Sources tell us, Khloe will be citing irreconcilable differences in her legal docs. The split should be pretty cut and dry — an ironclad prenup which kept all their assets separate … and no kids.

As we reported, Lamar’s bizarre freestyle rap video — in which he brags about cheating on Khloe — was the last straw in their crumbling relationship.  Immediately after TMZ posted the video last month, Khloe stopped wearing her wedding ring.

The end was a long time coming … Khloe had expressed dire concerns about the marriage ever since she learned about Lamar’s crack addiction earlier this year, but she forestalled divorce for fear he’d OD or worse.

Lamar and Khloe tied the knot in September 2009.

Who is gonna have the courage to make a change in this world and stand up to ignorance?