I have never seen so many standout performances in a single week. In my matchup alone, there were eight non-QB players who scored 20 or more points, led by his Arian Foster with 40.3 points. This was a crazy week for the offenses, with Pittsburgh putting up 51 points in a win against Indianapolis. With so many standout performances, there are a ton of winners in Week 8: END_OF_DOCUMENT_TOKEN_TO_BE_REPLACED

Maryland’s very own, Logic, dropped his debut album, Under Pressure, on Tuesday October 21st. Being born and raised in Maryland, I must say I was extremely happy to see Logic branch out from simply dropping mixtapes to finally dropping his album. Under Pressure has 12 tracks and the deluxe version of the album contains 15 tracks. I must say this album did not blow me away like I expected it to, but I can’t deny that I enjoyed most of the songs on the album. END_OF_DOCUMENT_TOKEN_TO_BE_REPLACED

Hundreds of students, supporters of gubernatorial candidate Anthony Brown and fans of Hillary Clinton gathered at Ritchie Coliseum to rally in support of Lt. Gov. Brown as he engages in a tight-knit race against his opponent Larry Hogan.

The rally, which lasted an hour, gave Democratic lawmakers a chance to present their platforms to a young student base whom they’ll need support from in order to come out with wins in various races during Tuesday’s midterm elections.

@ChrisVanHollen: “We haven’t gotten a vote on immigration reform” because of the Tea Party winning the last midterm elections

The main attraction of the day was of course, Hillary Rodham Clinton, but her speech did not come without controversy. Protesters representing a group known as United We Dream interrupted the former secretary of state at least four times over the course of 15 minutes.

The protesters called for an end to deportations of illegal immigrants with children here in the United States. Representatives of the organization say that the idea to interrupt Clinton’s speech was thought of at the last minute.

They previously interrupted a speech which Clinton gave in North Carolina and decided it would be effective to do so once again here in Maryland.

United We Dream is calling for an executive action on President Obama’s part and believes that Mrs. Clinton has an influential voice in the Democratic Party who can help bring their demands into fruition.

The group would like immigration reform to eventually pass but aren’t focused on legislation concerning the issue after it failed to pass in the House. They view an executive action from President Obama as much more feasible and said that they are “tired of waiting.”

As they chanted during Hillary’s speech, the crowd assembled at Ritchie Coliseum drowned out their noise by chanting “Hillary! Hillary!” Police seemed to have a difficult time leading the protesters out of the arena but members of the crowd helped out by pointing to the culprits of the protest.

Students line up outside of Ritchie Coliseum waiting for Hillary Clinton on Thursday October 30, 2014.

Moriah Ray takes a selfie during the rally.

Senator Barbara Mikulski in the background as Sen. Cardin speaks

Members of the Black Student Union and NAACP at the rally

Another protester interrupts the speech

And yet more protesters interrupt the speech

Clinton takes selfies with students in the crowd 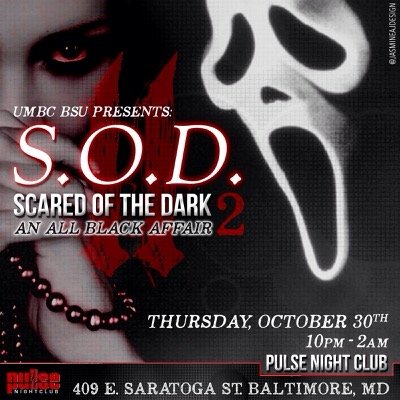 UMBC’s Black Student Union has been pretty busy organizing student events such as a date auction, a cultural awareness seminar, a fundraiser and a potluck.

But none of those events will be as big as their annual Halloween party taking place tonight at Pulse Night Club in Baltimore.

We spoke to the organization’s President, Ben Chukwurah, to get the scoop on the Halloween eve festivities.  END_OF_DOCUMENT_TOKEN_TO_BE_REPLACED

October is Breast Cancer Awareness Month. Sports have played a major role in raising awareness for this horrible disease. The NFL started a Crucial Catch campaign in 2014, creating a partnership with the American Cancer Society to provide education and screenings to under-served communities. College football teams like the Oregon Ducks also created jerseys to wear for a nationally televised game. Everyone wins when we unite and support a cause.

As for me, I race through the Susan G. Komen Foundation. I joined my mother, two of my aunts and my younger sister at the race this year. This was the sixth consecutive year that I have attended the event in Hunt Valley, MD. Every year, I get the question that every participant, runner or walker, supporter or survivor, man or woman is asked: Who do you race for?

The simple answer to that question is I race in memory of my maternal grandmother Linda B. Lipp. I will dive into why I run, but after we take a journey; a 3.1-mile journey to be exact.

END_OF_DOCUMENT_TOKEN_TO_BE_REPLACED

In the fall of 2014, Prince Frederick Hall, opened on North Hill next to Wicomico Hall. The dorm has often been compared to Oakland Hall on North Campus because it houses singles, doubles and four-person semi-suites. Also, Prince Frederick Hall has “green” features, such as energy-efficient windows. Prince Frederick is home to 462 students, many are freshmen enrolled in the new honors program Advanced Cybersecurity Experience for Students (ACES). Only one third of the residents are non-ACES students and are mostly upperclassmen.

On each floor, there are two lounges. One is a designated study spot and has many tables and white boards, while the other has more open space for socializing. The dorm also has a large 140 seat multipurpose-room and 75 seat seminar room on the main floor of the building.

END_OF_DOCUMENT_TOKEN_TO_BE_REPLACED

Since the release of her debut album in 2006, Taylor Swift has been the universal shining star of country music, appealing to both country fans and people, like myself, who cringe at the sound of Blake Shelton or Miranda Lambert.

On Monday, however, she finally broke free of the grasps of Nashville, Tennessee and her country roots with the release of 1989, a true “pop” album that is unique both in Taylor’s discography and that of modern pop as a whole. And yet, the album is unmistakingly Taylor Swift, soaring high above contemporary pop stars in a record jam-packed with tracks that are simply awesome.

1989‘s first song, “Welcome to New York,” serves as the backbone of the entire album, embodying everything that this new era of Taylor Swift stands for: a wide-eyed country girl finally ready to take on the bright spotlight of the Big Apple with a strong and confident energy that has never been seen in Taylor before. The synth-based background, along with a vocal far less organic than anything ever heard from Taylor, creates a refreshing and exciting sound that maintains the phenomenal artistic talent of Taylor Swift and characterizes the rest of 1989.

Aside from a couple of tracks (“Shake it Off,” “This Love,” and “Clean”), the rest of the album consists of nine songs that carry a similar sound to “Welcome to New York,” yet are all incredibly and uniquely dynamic on their own. It is to no surprise that almost all of the album’s songs revolve around the topic of love because, well, what else has Taylor Swift ever written about. Even so, her lyrical style of romantic story-telling, whether it be about finding, experiencing, or losing love, seems as though it will never fail, as songs like “Out of the Woods” and “How You Get the Girl” give the same chills that one feels when listening to some of her most emotionally riveting old tracks, like “Holy Ground” or “Haunted.”

Personally, I have hated the album’s lead single, “Shake it Off,” since its late-summer release. And when I learned it came from Taylor, I was very disappointed with what I imagined would be an implication for the rest of her new record. I came into 1989 with drastically lower expectations than I had two years ago when first listening to Red, and on Monday I was pleasantly proven otherwise. Nearly every song could be released as a dominant single, and I can guarantee that mainstream radio will cycle through at least half the album for several months to come. This album is too different from anything ever done by Taylor before to be concretely labeled as her best record, but it is certainly in contention, and without a doubt among the best pop albums, if not the best, from the past couple of years.

While country fans may feel abandoned, Taylor fans, like myself, can find this as a personal evolution by the artist that, though no better or worse than Taylor had been before, is magnificently enjoyable and, like I said before, simply awesome.

Favorite Songs: “Welcome to New York,” “Out of the Woods,” “I Wish You Would,” and “How You Get the Girl”

Dear White People, a debut film for director and writer Justin Simien, pulls back the veil of America’s boxed concept of identity, especially in black culture. Through his four main characters, all of whom are black and attending Winchester University (a fictional Ivy League), Simien is able to show how hard it is to change an established stereotype.

The main protagonist, Samantha White (played by Tessa Thompson), tries to overcompensate for her racial status as a headstrong black activist, willing to stand up against racially insensitive students or even the president of the school. She uses her radio show, Dear White People, to highlight the issues relevant to practically every college campus/natural interaction a black person can have. But she isn’t simply just black.

END_OF_DOCUMENT_TOKEN_TO_BE_REPLACED

Why All of Us Must Oppose Racial Profiling

When? Monday at 2pm

Where? Nanticoke Room 1238 in Stamp

Why? Racial profiling has taken centerstage lately with headlines such as the Michael Brown shooting END_OF_DOCUMENT_TOKEN_TO_BE_REPLACED

From our good friends at IAmBrianJames.com.