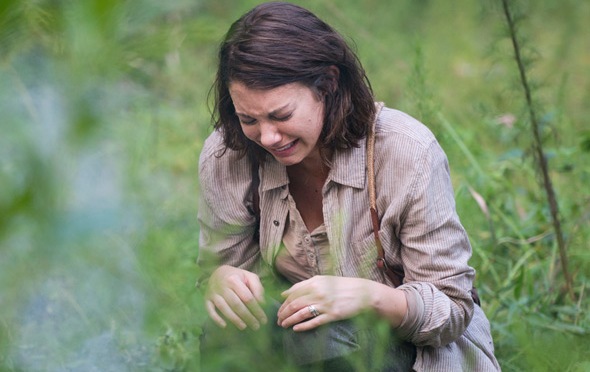 “What Happened and What’s Going On” strengthened, yet again, my ideology about the The Walking Dead. This episode displayed that the content and thematic elements within the show do not revolve around zombies or graphic violence, but about the human condition.

It is a time of mourning among the remaining members of Rick’s group. The recent loss of Beth and Tyrese has taken a severe toll on the entire group, especially for Maggie, Daryl and Sasha, which has caused a shortage in morale.

However, the group suffers from a more apparent shortage: food and water. With all of the zombie slaying and scavenging, the group has begun to feel the extreme heat and dry air of Georgia. Even though their numbers are many, I cannot help to feel sorry for Rick because of his responsibility as leader, having to worry for all of the members of the group, that certainly cannot help especially when he has to make sure everyone is capable of fighting.

Throughout this episode, a sense of deep depression looms over the group, and while watching, one can immediately acknowledge that the circumstances are turning against their favor. Another characteristic that separates the mood of the episode is the mind states of certain individuals.

Maggie, still grieving the loss of her sister, is stuck in a dark place and there are moments throughout the episode where she exhibits signs of wanting to die. Glenn notices one of the moments and manages to push Maggie out of her depressed mentality for a little while longer. I thought this was an excellent example of the talent the different actors bring to the show.

Their relationship and the way they communicate always felt quite genuine to me, it was never too sappy to be unrealistic and never too dysfunctional to be annoying, it is quite appropriate concerning the predicament the group finds themselves in, and it does bring some sort of light amidst the destruction and death surrounding everybody.

I also noticed Daryl to be more unresponsive and less motivated. The loss of Beth is still all to fresh in his mind and he has not really had a moment to properly reflect on his emotions for her and to come to terms with the reality of the loss. Carol even urges him to move on and that he is “not dead,” meaning that life has to move on.

Sasha, on the other hand, suffers miserably, but instead of sobbing her eyes out and thinking of a pleasurable death, she carries on lifeless. The way she acts reminds me of the behavior she had after Bob’s death, except this time around it’s worse because she has lost the last person whom she truly loved and had a strong connection to, her brother.

The issue with Sasha’s mentality is that she cannot control her anger or keep herself together at crucial moments that the group needs to be unified. In one scene, a horde of “walkers” closes in behind the group, and Rick decides to make two lines of three on either side of a bridge, and use a tactic that would save them, much needed, energy.

But, Sasha, still messed up, decides to kill the “walkers” brutally, thereby wasting the efforts of the others, as we hear Abraham specifically saying that the plan “got dicked.” There is a tense moment where Michonne tries to reason with Sasha, reminding her of Tyrese’s similar behavior after Karen died, but Sasha remains unflinching and says she is not like her brother.

Moreover, the group is not on the best of terms even amongst each other.

Another scene where uneasiness between two group members is displayed is when “Father” Gabriel tries to approach Maggie kindly and asks her if she would ever like to talk about her loss, but Maggie immediately shoves him off. The main reason this was sad to me was because Maggie confirms she is no longer religious, but the loss of religion is not what makes me sad, the loss of faith is what aches me, and it spreads throughout the ranks of the group. Later on we even see Gabriel throw his clerical white slip into a fire, signifying more loss of faith.

While the group continues on their way up to Washington, D.C., they find a large amount of water bottles in the middle of the road and a note that claims to be from a friend saying that the water is a gift. However, we all know what mysterious notes and surprise gifts get you on this show, and that is usually trouble.

Eugene tries to pick up one of the bottles and drink it, but Abraham immediately slaps the bottle out of his hand before a drop can land on his tongue. This was another instance, where we can see the loss of hope, here within Eugene, who apparently does not care if he dies at this point. But, I did think it was admirable of Abraham to step up and do that, especially since he was the one who “got dicked” by Eugene.

This leads me to believe that Abraham, a character who we have not heard a lot out of recently, still cares about the members of his group, regardless of past events. In addition, it begins to rain. This is where the mood lightened up a little bit and some of the group members seem to smile and let out sighs of relief as they set down bottles to collect the water.

Towards the ending of the episode I was treated to one of the most inspirational scenes from The Walking Dead. As the group scrambles to find shelter from the incoming thunder storm, Daryl comes out of the forest, where he went to reexamine himself and clear his thoughts of Beth, and leads the group to an abandoned farm they can use to spend the night.

During the nighttime, the group sets up camp fires inside of the barn and settles down. Rick and Daryl strike up an interesting conversation during this time, and BOOM! Yep, Rick mentions the show’s name while describing how his grandfather felt when he fought in WWII.

He says he used to go to the front line thinking that he was dead already, so if he came back from the war he could return to his normal life. However, Daryl tells Rick that they aren’t dead and that the group is not like the “walkers” out in the world, to which Rick is silent for a while before agreeing. Daryl then moves towards the front of the barn where they have locked up the two main doors, as he peers out into the storm, he sees a horde of “walkers” approaching straight for the barn and before he can grab the group to help him, the “walkers” are already trying to push down the doors.

Sasha, still not really there, notices Daryl struggling to keep the doors shut from the horde and runs up to help him, then Maggie notices and does the same, the rest of the group follows after everyone begins to notice and rushes to keep the zombies at bay. I think this scene will become iconic within the show’s community because of the united efforts of the entire group. It was a moment where everyone let their own personal issues go and formed into one body of people who’s ultimate goal is to survive, but in order to do so they need one another to keep them going.

I think I’ll end this review end here, because frankly, I liked where I ended it.

P.S. After the storm, Maggie and Sasha smile (FINALLY) while observing a beautiful sun rise. But, before they can continue a clean, stranger greets them proclaiming to be a friend, asking to speak to Rick. All I can say is that I don’t like the way he looks, but then again, if you’re a true fan of the show, you don’t like any new face that crosses the group’s path.