Sunday night, when most people were getting ready to take on Monday morning, and students are doing last minute assignments due by midnight; two of the hottest hip hop artists broke the internet. Social media world received word that the mixtape everyone anticipated would drop on iTunes at 8pm. Drake and Future collaborated on What a Time to Be Alive, which was recorded in an Atlanta studio, produced by the great Metro Boomin.

After Dirty Sprite 2, the music world hailed it as the “post-breakup” fire expected from Future. His split with the singer, Ciara, did wonders for his music career, as the success from his album ushered him back into the limelight. Meanwhile, Meek Mill did something similar to Drake’s career. While most of his diehard fans may argue Drake didn’t need the extra boost to begin with, his beef with the Philly rapper had the music world buzzing. His diss tracks “Charged Up” and “Back to Back” had everyone choosing him in the “Meek or Drake” battle. Both Drake and Future’s recent success created an instant hype about this project.

Fans expected it to be the mixtape of the year. Their styles are completely different, so why the hype about the collab? We almost got a sneak peek at what WATTBA would be like in the single “Where Ya At” on DS2. The track is undeniably hot and has listeners knowing the lines verbatim.

So here’s the big question. Did the ‘tape live up to the hype?

There’s two sides of that outcome, however. One being the amount of unnecessary hype surrounding it. I mean, yes, it’s Drake and Future. Drake puts out fire; Future puts out fire. Can the two do it together? Well they did in tracks like “Where Ya At” and “Never Satisfied”. But did we really expect this to be a hall of fame- type mixtape? Future, still high from DS2 success, and Drake, hard at work on his anticipated fourth album, didn’t seem to put much effort into this project.

The two, along with Metro, met on Future’s home turf to record the album in six days. The other part to the outcome is the mixtape sounding more like Future featuring Drake instead of a collaboration. However, Drake has proven his ability to adapt to any sound- rap, pop, even latin and African music. While Future has stepped from his hardcore trap sound before, it still made more sense for the Toronto rapper to come to Atlanta, than the other way around.

When you kill all the hype that determined what WATTBA should’ve been before it was even dropped, what’s left is actually a decent banger. It’s not hall of fame, but there’s a couple songs already on everyone’s Friday night playlist. In most of the songs, Future leads in with Drake following behind with a verse or too. This doesn’t really help the argument that the mixtape is indeed a collaboration, but it creates a signature to how their tracks usually go: Future with the banger hook, and Drake with the catchy line that ends up as Instagram photo captions. “Live From the Gutter” is an example of that. “Reporting live from the f**king gutter b**ch, I aint talking about some big money sh*t” is the classic Future hook we loved and “This for my n*ggas on that bullish*t and that nonsense. This for my dogs that go Karrueche with the chopsticks” is the Drake line we talked about.

Tracks like “Diamonds Dancing”, “Scholarships”, and “Jumpman” where all three (Drake, Future, and Metro) shined rose to the top tracks of What a Time. Whereas fillers like “Plastic Bag” and “I’m the Plug” seemed to get lost in the shuffle. “Big Rings” was widely accepted as the single as fans are still chanting along with both artists “I got a really big team..Man, what a time to be alive.”

The mixtape ended on an interesting note. Both artists each performed lone on a track. “Jersey” and “30 for 30 Freestyle”. The tracks featured the artists in their own original sound. “Jersey” sounded like a bonus track from DS2 as Future recited “First I got married to the money, then I fell in love with that dirty.” “30 for 30” resembled other Drake freestyles like “9am in Dallas” and “6pm in New York”. It was almost like Metro said,”Here’s a beat for you, Future, here’s one for you Drake. Do your thing.” The mixtape let us enjoy why we love the artists together and the ending reminded us why we also like them separately.

If you got lost in the hype, then it’s understandable why the mixtape was a huge let down. When you listen to it exactly for what it is, just eleven tracks to bump in the car or in the dorm right before the weekend plans, it becomes a bit more fun to listen to. It won’t ever live up to what Views from the 6 will be like, or what DS2 has been, but hey, it’ll do. 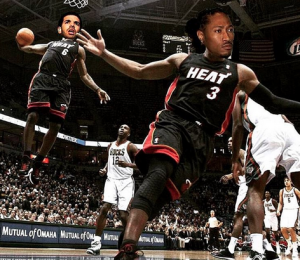