Do you know why they call the youths that came of age during World War I the “Lost Generation?”

It is not, as most claim, because those that lived through the war had been turned cynical and bitter from the wanton destruction and brutality of the war; it’s because barely anyone survived at all. In the Battle of the Somme alone, 1.1 million French, British, and German soldiers were killed.

They are called the lost generation because they were, quite literally, lost. END_OF_DOCUMENT_TOKEN_TO_BE_REPLACED

Anybody wandering the halls of Rockville’s Whooton High School on a Monday night may hear the iconic theme song from Super Smash Bros. Melee echoing from the school’s music room, but the young men and women inside the room are not playing the beloved video game; they are using everything from cellos to trombones to recreate its music with a full orchestra.

The Washington Metropolitan Gamer Symphony Orchestra is a group of more than fifty musicians and passionate video game players from around the D.C. area.

“We are the first community level group of musicians [in the D.C. region] to draw a repertoire exclusively from the realm of video game soundtracks,” said trumpet player Robert Garner.

END_OF_DOCUMENT_TOKEN_TO_BE_REPLACED

During the dedication of the Parren Mitchell Art-Sociology building at the University of Maryland on Dec. 3, a student interrupted the ceremony to criticize President Wallace Loh’s handling of the on-going controversy over the name of UMD’s football stadium.

The ceremony began with University of Maryland President Wallace Loh praising the life and career of the event’s honoree, the late Parren Mitchell, the first African American to attend graduate school at the University of Maryland and the first African American from Maryland to serve in Congress. Soon after Loh began speaking however, Colin Byrd interrupted Loh, shouting at him through a mega phone.

END_OF_DOCUMENT_TOKEN_TO_BE_REPLACED

On November 20, the National Consortium for the Study of Terrorism and Responses to Terrorism, or START, hosted an unusual scavenger hunt, asking students to use specialized devices to map out hot spots of natural radiation on campus.

Students lined up in front of a table outside of STAMP to receive a device that, at first glance, looks like an every day smartphone. But this device, the Kromek D3S, doesn’t make calls or take pictures; it detects radiation.

Students also received a sheet of paper with a series of cryptic clues written on it, each one directing them to a natural and benign source of radiation on campus. The goal for the scavenger hunt participants was to use the Kromek D3S to map out the natural radiation present across the University of Maryland campus, according to the proctor of the scavenger hunt Gary Ackerman. Students who managed to do this quickly and effectively won prizes such as IPads and Kindle Fire tablets.

But START, a research center at the University of Maryland sponsored by the Department of Homeland Security, wasn’t simply letting students play around with expensive technology. The goal of the scavenger hunt was to test the efficacy of the Kromek. By putting it into the hands of a couple dozen students, START hoped to see how this brand new technology performed in the field.

Michael Egnoto, the supervisor of the scavenger hunt, said that aside from evaluating new technology, mapping out this natural radiation helps START better understand how radiation is distributed around us, which he said has long term benefits for society.

“Long term, this helps us improve technologies that may be sensitive to certain types of radiation. Some electronics for instance, can become unreliable when around even naturally occurring levels of radiation.”

The poverty rate in College Park is high, but that may be because the United States Census Bureau included University of Maryland students in its poverty estimates of the town.

Students often report being unemployed or income-less which heavily inflates the number, he added.

Contrary to Toussaint’s statements however, Census Bureau officials have said only students living off-campus are counted.

By the Census Bureau’s standards, any individual who has been living or plans to live in a community for more than two months qualifies as a resident of that community, which includes off-campus student planning to spend their semester in College Park, even if their stay is temporary.

However, the survey does not ask off-campus students if they are financially independent.  Survey forms ask students questions from their level of income to how much government aid they receive, but do not ask if students are dependent on a parent or guardian.

The Census Bureau also applies this methodology to all towns with large student populations.

At the Bathroom Justice Panel in McKeldin Library Oct. 27, which met to discuss bathroom accessibility on campus, panel attendees said University of Maryland bathrooms do not adequately accommodate disabled students, despite meeting the standards of the American’s with Disabilities Act.

However, Romem’s positive sentiment was met with skepticism from panel attendees. Romem praised a wheelchair accessible bathroom in the chemistry building for its adherence to ADA code, saying it has spacious stalls with supportive railings for those in wheelchairs. But a student in the room pointed out that this bathroom is located in the basement of the chemistry building, inconveniently placed for any wheelchair user on another floor. Romem said ADA standards do not require Wheel chair accessible bathrooms be present on every floor of a building.

Graduate student Angel Love Miles, who uses a wheelchair herself, was the most outspoken attendee of the night. She said that while Maryland bathrooms meet ADA standards, those standards fail to adequately meet the needs of individuals like herself. Miles pointed out that often times the toilet seats in Maryland bathrooms are too high for easy wheelchair-to-seat transfer, and the soap dispensers in the bathrooms tend to be located out of reach for smaller individuals or those in a wheelchair.

Though, Miles’ biggest criticism with the bathroom situation on campus was directed at the student body. She said that because wheelchair-accessible stalls are more spacious, university students without disabilities will often use them instead of the more confining standard stalls. 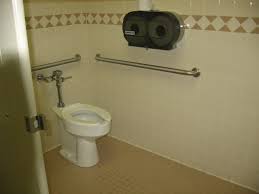 But the problem with this, she said, is that the more these stalls are used, the dirtier and more worn they get. And while student without a disability can always use one of the other stalls, if the sole wheel-chair accessible stall in a bathroom falls into disrepair, a disabled student has no other options. 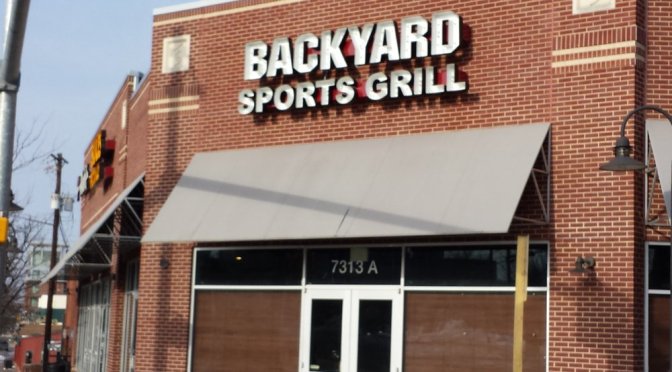 In an ongoing controversy regarding the Backyard Sports Grill, patrons of the bar rejected accusations from the College Park City Council that the proprietors of the restaurant have created a “pornographic” or unsafe environment in their establishment.

Several council members cast the restaurant in a negative light during an Oct. 6 council work session that discussed the Backyard Sports Grill’s role in a Jul. 31 altercation.

“[the Backyard Sports Grill] described an operation that all kinds of people would be comfortable going to and having an enjoyable and a safe experience, and that’s not what we’re seeing,” said council member Stephanie Stullich.

But several patrons of the Backyard Sports Grill disagreed with the council’s assessment of the restaurant.

END_OF_DOCUMENT_TOKEN_TO_BE_REPLACED 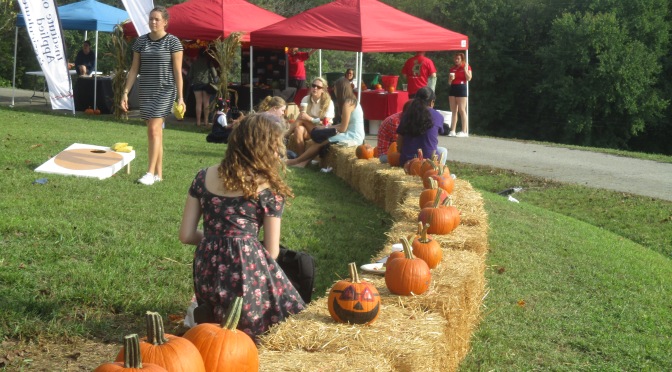 Terp Farm hosted its first public event at the Central Maryland Research Center in Upper Marlboro, Maryland Oct. 9, inviting university students and others to partake in food, entertainment and tours of the Terp Farm facility.

Terp Farm is a collaboration between three University of Maryland entities. The Department of Dining Services, the College of Agriculture and Natural Resources and the Office of Sustainability created Terp Farm in 2014 with the intention of producing locally grown vegetables for consumption on the UMD campus.

A lively event, Green Tidings food truck stood at the center of the festival and served both lamb sandwiches and ratatouille subs. Behind the van truck was a pumpkin painting activity table for younger guests, and the festival also featured live music from local D.C. band Numbering Sundays, who performed covers of popular folk songs by the dining tent.

END_OF_DOCUMENT_TOKEN_TO_BE_REPLACED

The College Park City Council decided to take steps to revoke the entertainment license of College Park’s Backyard Sports Grill when it met for a council work session on Oct. 6.

On July 31st, a fight allegedly broke out at the restaurant on Baltimore Avenue, leaving four people injured, according to council member Robert Day. The Backyard Sports Grill was hosting an event that night and did not hire an off-duty Prince George’s County police officer to supervise the event, which was a violation of its entertainment license.

The restaurant’s owners, Dana Lee and Kristi Lee, subsequently appeared before the College Park City Council on Sept. 15 and promised to make changes to their practices. But according to council member Robert Day, another fight broke out when the restaurant hosted another event on the weekend of Sept. 18.

During the council work session on Oct. 6, the council resolved to push for revocation of the restaurant’s entertainment license when the July 31 incident is brought before the Prince George’s County Board of License Commissioners Nov. 4.

END_OF_DOCUMENT_TOKEN_TO_BE_REPLACED

When I say I am going to talk about campus culture, one might reasonably assume I am going to discuss campus sports or showcase an interesting club or event. But culture is not always that palatable. Sometimes culture, especially campus culture, is raw and unnerving. Sometimes culture is hastily scribbled nonsense on a bathroom stall. And that is the brand of culture I want to talk about today–the kind of culture one can only experience while sitting on a dirty public toilet. You know, the best kind of culture.

I found this scathing accusation against our school’s president in the men’s bathroom of the North Campus diner. For all you kids not hip on the lingo, “danku” refers to the highest quality of marijuana. One could easily write this off as libel or defamation, but this accusation has been corroborated by another party. Right below the accusation is written “Too right, mate.” That’s enough proof for me.

If you venture into the family bathroom in Mckeldin library, you’ll stumble upon a baby-changing station with “place sacrifice here” written on it. In the ancient city state of Carthage, it was common practice to sacrifice one’s infant to appease the gods. It’s good to know traditional religious values are still being practiced in this increasingly godless and immoral age. END_OF_DOCUMENT_TOKEN_TO_BE_REPLACED