With the end of the semester approaching, acapella season is in full swing as Maryland’s top performance groups all prepare to put on their big fall shows. The “Pandas” of UMD’s self-described “most eclectic co-ed acapella group” on campus, PandemoniUM, were no exception, as they hosted their fall performance at the Memorial Chapel this past Friday night. The group takes pride in their unique, diverse choices in musical selections and arrangements, a feature they certainly showcased this week.

The set list for the night consisted of 13 songs, split by a brief intermission, all originally arranged by several different group members. The Pandas kicked off the night with a powerful arrangement of the song “MLTMDTTRTSM” by the group Little Green Cars, a song the majority of the audience was undoubtedly unfamiliar with. However, despite the song’s obscurity, it proved to be a crowd favorite as soloist Emma Weber showed off her immense vocal talent with strong back-up from the rest of the group.

The majority of the set consisted of songs like the first, featuring titles such as “Sun & Moon,” “Find You,” “Medicine,” and “Another Love,” all by artists largely unknown by listeners. Nevertheless, they balanced their program by including a few more recognizable songs; most notably “Rather Be,” by Clean Bandit, “Parachute,” by Ingrid Michaelson, and “What Now,” by Rihanna, whose soloist Valen Gordon truly rocked the crowd with her massive and passionate vocals. Also included was a charming rendition of the Christmas classic “Baby It’s Cold,” featuring soloists Danny Mackey and Kiara Manosalvas, as the rest of the group provided supplementary harmonies while sporting classically ugly holiday sweaters.

Outside of the set list, the Pandas also featured some surprises of their own – prior to intermission, for example, the girls of the group joined together to serenade the guys in a mash-up of popular love songs. And at the end of the program, following the impressively arranged Simon & Garfunkel medley, the group came together to bring forward both alumni and current semester graduates in an eclectic medley which incorporated all styles from jazz to indie to pop. 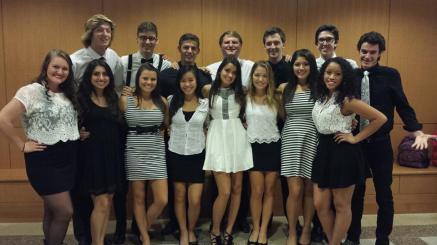 Directly following the end of the set list, group members came forward to make closing remarks. Sophomore Gordy Scofield stepped up to tell a knock-knock joke, while music director Danny Mackey also came forward to congratulate his successor to the position, Seamus McKenna, after he announced he would be studying in Spain for the upcoming semester. The night then ended with overwhelming hugs, smiles and cheers from the crowd – audiences even stood give PandemoniUM a proper standing ovation.

Disclosure: I’m actually a member of this club myself, but there was no intended PR/bias involved in writing this story! The interviews and information are all legitimate.

At first glance, the phrase can seem enigmatic, especially to those who aren’t aware of its context. But to Yi Q Chen, Tracy Wilkinson, and the other members of the Colleges Against Cancer executive board here at UMD, this phrase encompasses everything their club stands for. END_OF_DOCUMENT_TOKEN_TO_BE_REPLACED

Two months after the shooting of Michael Brown, Ferguson’s story is still unfolding – so where does the community stand now?

Today, 66 days after the tragic shooting of 18-year old Michael Brown sent shock waves throughout the nation, the teenager’s community in Ferguson, Missouri continues to rally in support of his family and against the local police force responsible for his death.

The incident occurred August 9th, when Brown was apprehended by Officer Darren Wilson for “walking down the middle of the street blocking traffic,” according to CNN and police chief Thomas Jackson. After what has been described as a violent struggle between the teenager and the officer, Wilson withdrew his gun and fatally shot Brown, an action that has yet to be ruled upon in terms of its legal justification.

Members of the Ferguson community, as well as thousands of other U.S citizens, are still expressing their outrage regarding Brown’s murder and their opinions on racism within the police force.

Dozens of protests have been sparked and subsequently shut down, as supporters have gathered on the site of the shooting, outside the police station, in front of local businesses, and in the middle of the streets; leading to multiple arrests and even a tear-gas incident. These protests, two months later, have yet to cease.

In fact, it seems the rallies had only just begun, as this past Friday marked the first day of “Ferguson October,” the four-day series of civil disobedience and resistance to demand Wilson’s arrest.

Hundreds of protestors congregated on the steps of the Ferguson police station for four hours on Monday – even in the face of torrential downpour – in order to represent how long Brown’s body had been left in the street after he was shot. Throughout the 4 days of protesting, which were comprised of demonstrations at the police station, at local universities, shopping centers, and City Hall, over 50 protestors were arrested, according to the Associated Press.

Clearly, the small Missouri town is not one that concedes easily. Brown’s mother and father, Lesley and Michael, Sr., have issued statements calling for both peace and justice, maintaining that the latter would only be present in the form of Darren Wilson’s arrest. Whether or not the family will obtain the justice they and the rest of their community are fighting for is to be determined, as the entire nation awaits the decision of the case’s grand jury with bated breath.

New legislation in Maryland is expected to change many residents’ daily lifestyles, as the laws address an entire spectrum of issues from marijuana possession to yoga sales tax. Effective Wednesday, October 1st, the legislation enforces both stricter and more lenient policies on several major concerns.

The most controversial new policy lessens the punishment for those apprehended with 10 grams of marijuana or less, replacing potential jail time with a first-time offense $100 fine and a repeat-offense fine of up to $500. END_OF_DOCUMENT_TOKEN_TO_BE_REPLACED